I think I mentioned it briefly, but Focuses is built mostly with SwiftUI. Overall, I'm very impressed with SwiftUI. I don't think I would've been able to build the first version of Focuses as quickly as I did had I not used SwiftUI.

Focuses is my first "real" iOS app. My first app, Send To Nowhere, is a simple app using UIKit, Swift, and no storyboard. I'm still a novice when it comes to the iOS ecosystem. I'm a full-time web developer by day, so using SwiftUI felt familiar in ways. However, the declarative nature of it still feels quite foreign from time to time.

I was worried that SwiftUI wasn't going to be mature enough to complete my app. I was surprised at how capable it currently is—despite it's many shortcomings—and I'm very excited to see it develop. It's not perfect, but I was able to use it for about 95% of my views. Even in the short time I have been building Focuses, I've seen great bug fixes and improvements come to SwiftUI. I'm very optimistic for it's future.

SwiftUI made some things in Focuses a breeze to implement. Take the animation when filling up the circle. That whole view, including the animation, took me about 10 minutes to make. Again, I'm not a UIKit expert, but I have no idea where to start if I had to make that same view without using SwiftUI.

Creating complex layouts like the calendar was relatively straight forward as well. I think my first implementation had too many nested views, which were being rendered too often, so it took a long time to load. But it was easy to go from idea to implementation quickly. I was able to iterate and make a much more performant version fairly quickly. 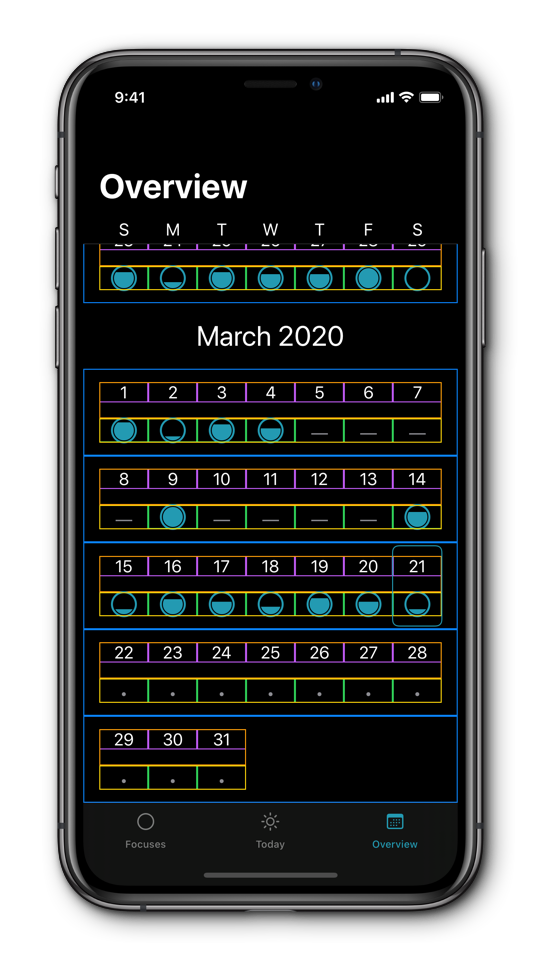 I also like how easy it is to use CoreData with SwiftUI. There were times that things weren't updating when I thought they should've, but I found ways around it. This was my first time using CoreData, so for all I know, I could be doing everything wrong and that's the source of my problems. Hopefully not though.

The main issue with CoreData and SwiftUI, in my opinion, is previews. I could not find a way to adequately seed that database for previews. So for much of the project, I did not use previews. Maybe I need to take another look at this.

SwiftUI is great at hiding complexity and implementation details, like when using @FetchRequest. However, once you want to do something that is more complex, like pass in params to your fetch request, things can get messy.

Here's a couple things I needed to use UIKit for:

There's also some things that just don't make a lot of sense. Action sheets do not work on iPad. You have to use a work around. iPad support in general seems kinda weak. I’ve found it tough to make layouts for iPad, part of the reason the first version of Focuses doesn’t have great iPad support. I need to spend more time figuring it out.

I also had a lot of trouble embedding forms inside other views, like on the privacy and about views. My solution is hacky and doesn't respond well to changing the system font size, but it works for now. Essentially, I have to give the form a set height based on my best guess using the font size. Additionally, I have to use .fixedSize(horizontal: false, vertical: true) on all the text so it would wrap properly.

I also wish there was a way to customize the navigation bar. As far as I can tell, you're stuck with it's color and font.

I'm hoping all these things will be addressed in iOS 14, or possibly even point updates of iOS 13.

The best resource I've found for SwiftUI is Hacking with Swift. The examples are fantastic.

If I were starting a new app today, I think I would still start with SwiftUI. I feel like I'm faster when I use it, and it's pretty simple to use a UIKit view if you need to. I think I've only scratched the surface of what SwiftUI is capable of. I need to delve deeper into animations and transitions.

I'm excited for the future of SwiftUI. I feel like it allows me to create things I would've dreaded to try a year ago.

If you're curious about how I did anything in Focuses, let me know on Twitter, or use the contact form. I can dig into the nitty-gritty specifics.